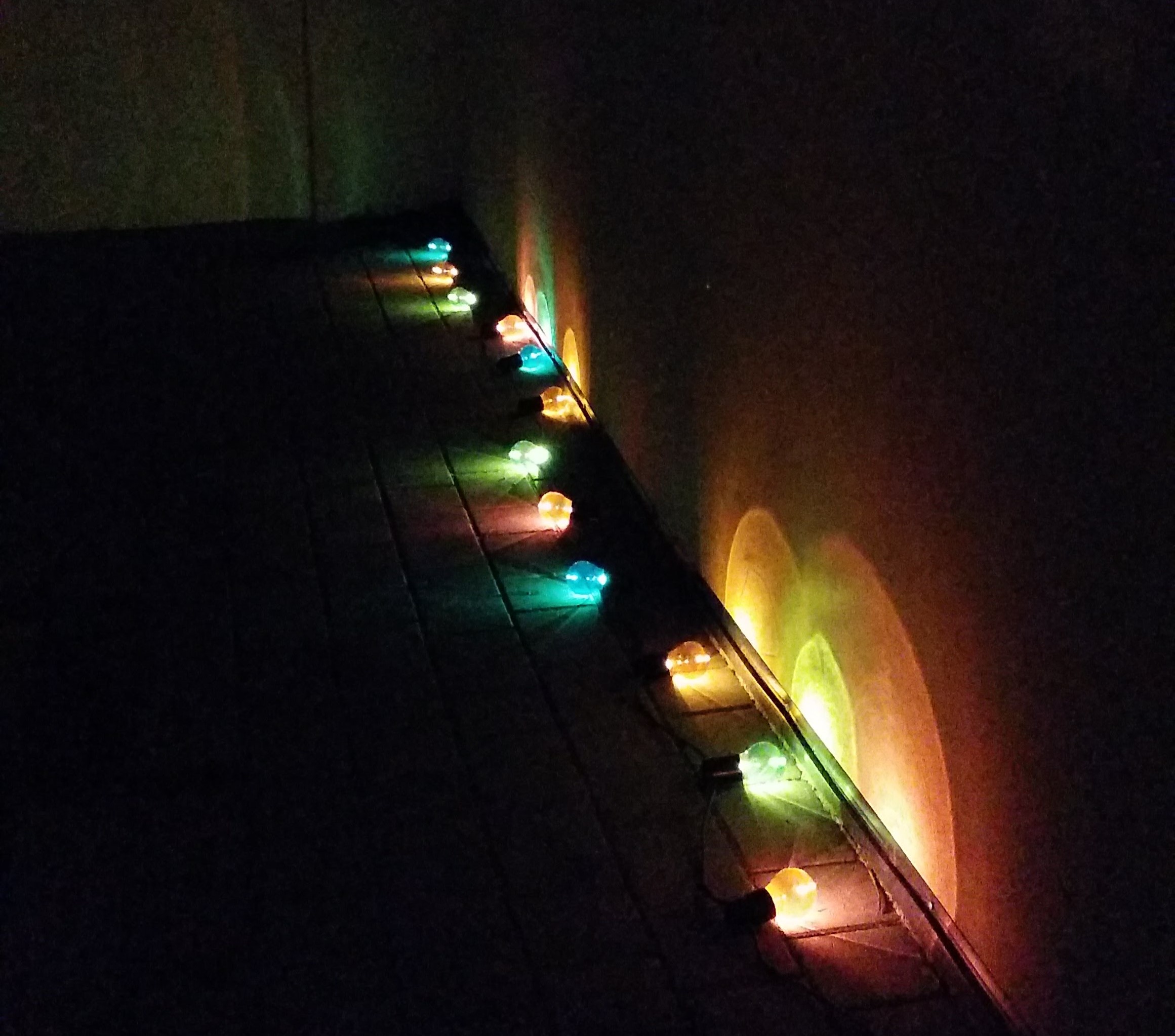 The community center is glowing with lights and a busy hustle; there are candles and lightning chains lining along walls and shelves; the promising scent of frying oil penetrates every corner of the half-parterre flat in the Bratislava center. Today is the Christmas celebration of Mareena, a civic association which helps refugees make Slovakia their home and offers possibilities to mingle with locals. „Come in, I’m sure you must be hungry,“ says Andrea, who is in charge of the volunteer program, to the arriving guests. „How do you know?“ mocks Karim in fake surprise, while Rashir is already on his way to the kitchen to get hold of his life elixir, black tea.

Little later, director Miška is introducing the first course of the feast, sweet oblates with honey and garlic, and thanks the guests for their help and support in 2017. It was an eventful year indeed: The young organization got officially registered as a civic association and opened their own community center. Mareena emerged from a civil initiative launched in 2015, when a few activists set out to convince the government to accept 100 refugee families. Their aim was to find 1000 volunteers who would be able to stem the expected workload. After a few weeks, they had already found 2000 Slovaks who were willing to offer accommodation, jobs, babysitting or language training. The government turned out to be unimpressed and didn’t comply to their demands; but the audacious initiators weren’t even dreaming of forgetting about the great potential they just unearthed and developed a full-fledged program of volunteering, education and community activities. Next to offering help, they are also very serious about meeting their „protegees“ on an equal footing: Refugees offer their own courses or activities and present their country in cultural and culinary ways. „Many of you have been with Mareena for long and helped us a lot during this year. We will thank you by serving you the traditional Slovak Christmas dinner“.

And they all accepted the invitation: Ms. Fariha, an Afghan mother of three who recently started her own Kebab enterprise in order to support her family, since her husband is sick with cancer; Ms. Daryna, who left Donetsk aged 67 and is eagerly learning Slovak and English to start a new life in Bratislava; Mahmud, who is under threat in his home country Afghanistan because they served as translators for the American military; Ms. Marjam, who worked as a gynecologist in Kabul for 30 years and and now isn’t even allowed to work as a nurse; Karim, a Coptic Christian from Egypt who came all the way from the refugee camp in Rohovce where he is waiting for his asylum plea to be decided in court; and many more. 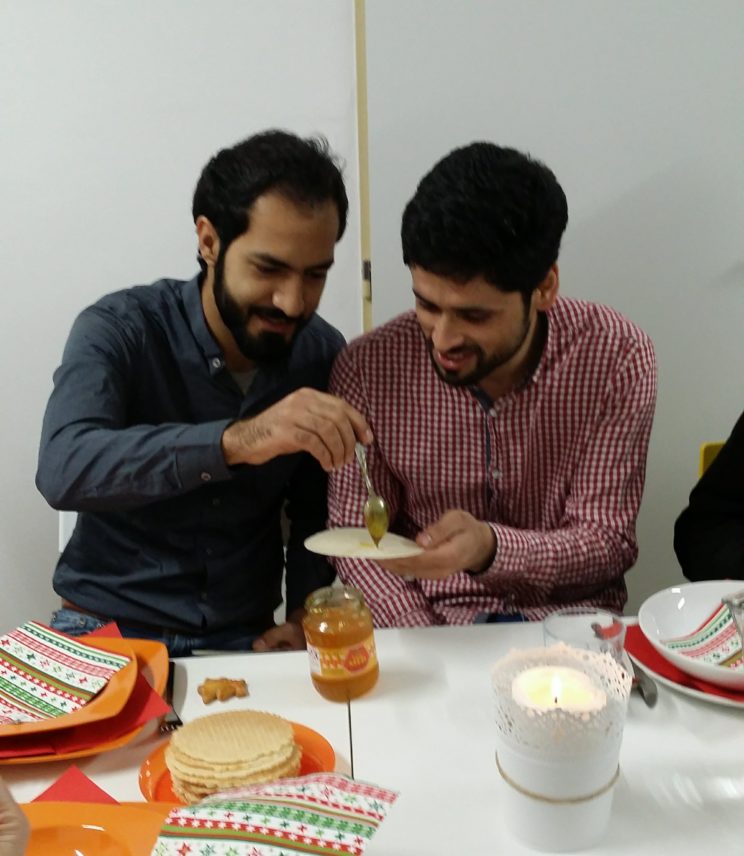 Andrea cuts an apple into two halves horizontally and shows the seeds forming a star to the dinner party – a forecast of good luck and health for the year to come. As a starter, Miska offers oplatky, thin, crispy, sweet wafers with honey, since honey stands for goodness and abundance. The first cringe of the evening occurs when Miska throws garlic into the mix. Apparently, the taste harmonizes nicely with the sweetness of the wafer and the honey; plus it’s also a symbol of good health. The next course is the ultimate Slovak Christmas classic: Kapustnica, the cabbage soup which contains half of the pantry, from hand-picked mushrooms to sausage and dried plums. In order to be as inclusive as possible, the team decided on a vegetarian version with soy and tofu „meat“. The sour taste of this national dish is not for everybody. Mahmud exclaims after the first spoon: „I can make better soup!“ He has been in Slovakia for five years and works as a chef in a Slovak restaurant. Many send their half-filled plates back to the kitchen. Ms. Daryna enjoyed it though.
The main dish consists of potato salad and carp filet. Miška tells the bewildered audience that many Slovak families buy a live carp, but it into the bathtub for a few days, befriend it, and then kill it on Christmas day to have fresh fish. Meanwhile, behind the scenes, community manager Andrej is hectically juggling pans, breading and quadratic pieces of deep-frozen carp. The result is more than satisfying though. The filets and the salad bowl are gone in a heartbeat. Rashid demands a second serve of tea. 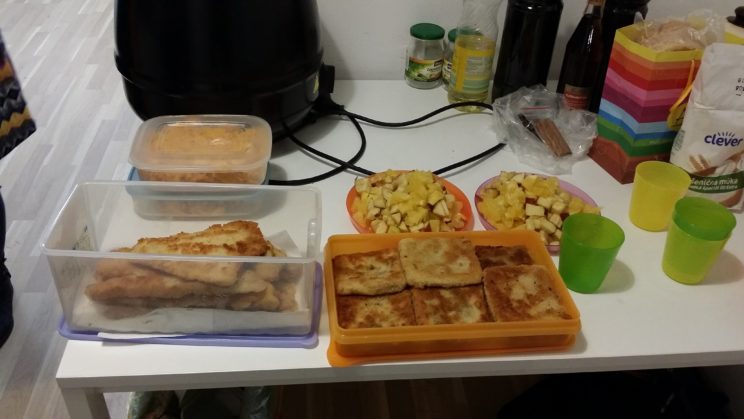 The final dish is so-called Bobálky, or Opekance – tiny cooked dumplings with a lot of poppy seeds and sugar.  „Kind of dry“, comments Fariha, who is famous for her finger-licking, honey-dripping Baklava. The guests don’t even finish one of the two pots which volunteer Zuzana prepared. „I should have known this“ comments Zuzana laconically. „Who even likes Opekance anyway?“  „Are you kidding? Opekance are the best!“ says someone else. Now the Slovak helpers exchange their family Christmas traditions and realize that they do not always match: Some serve Opecance in the beginning, before the soup; some don’t like carp so they substitute it with a different kind of fish, or serve baked ham or goose instead. Not to mention Kapustnica which occurs in a Million different variations.

This concludes the official part of the evening – the tables are now pushed aside to make space for more guests, friends and Slovak volunteers who helped Mareena along the way. Andrea has a little present for all of them: „Let’s be honest, without you Mareena couldn’t exist“. There are presents for the children too, nicely wrapped and name-tagged Lego sets. Now is also the time the Punch gets served – the first part of the evening was completely alcohol-free. There is also a spread made of bryndza, the Slovak goat cream cheese, as well as tons of Christmas cookies:  Rashid is getting his third serve of tea, even though there is still quite a lot left in the can, although not as hot as it should be. The Christmas tree, which Farhina’s kids and Karim decorated earlier, is lending a room a festive gleam. The kids play with their new toys, the foreign guests chat with each other or with the volunteers, American Christmas songs sound from the speakers. Mahmud is engaged in a deep conversation with his Slovak friend Iva. He complains that he doesn’t always experience this kind of hospitability in Slovakia. He has gotten used to the long stares and skeptic expressions in own or on public transport. What gets him going is when people ask him whether he expects a terrorist attack on a Slovak Christmas market as if being a Muslim made him an expert on terror. But the closer the Christmas holidays draw, the nicer people seem to get towards him as well as to other groups who are usually met with disdain, and the more eager they seem to share their national culture in shape of hectolitres of Kapustnica. Rashid can’t help but notice: „It’s a phenomenon: Slovaks are at their best on Christmas“.
All refugee’s names have been changed.
Kapustnica recipe: http://bratislavafoodtours.com/slovak-recipes-worth-taking-home-kapustnica-sauerkraut-soup/
Merry Christmas/Veselé Vianoce!
ChristmasCultureethnographyrefugeesSlovakia
A Question of Faith: Teaching tolerance in a Northern Slovak mountain town
We’re all in this together: Discussing extremism with extremists