A Question of Faith: Teaching tolerance in a Northern Slovak mountain town 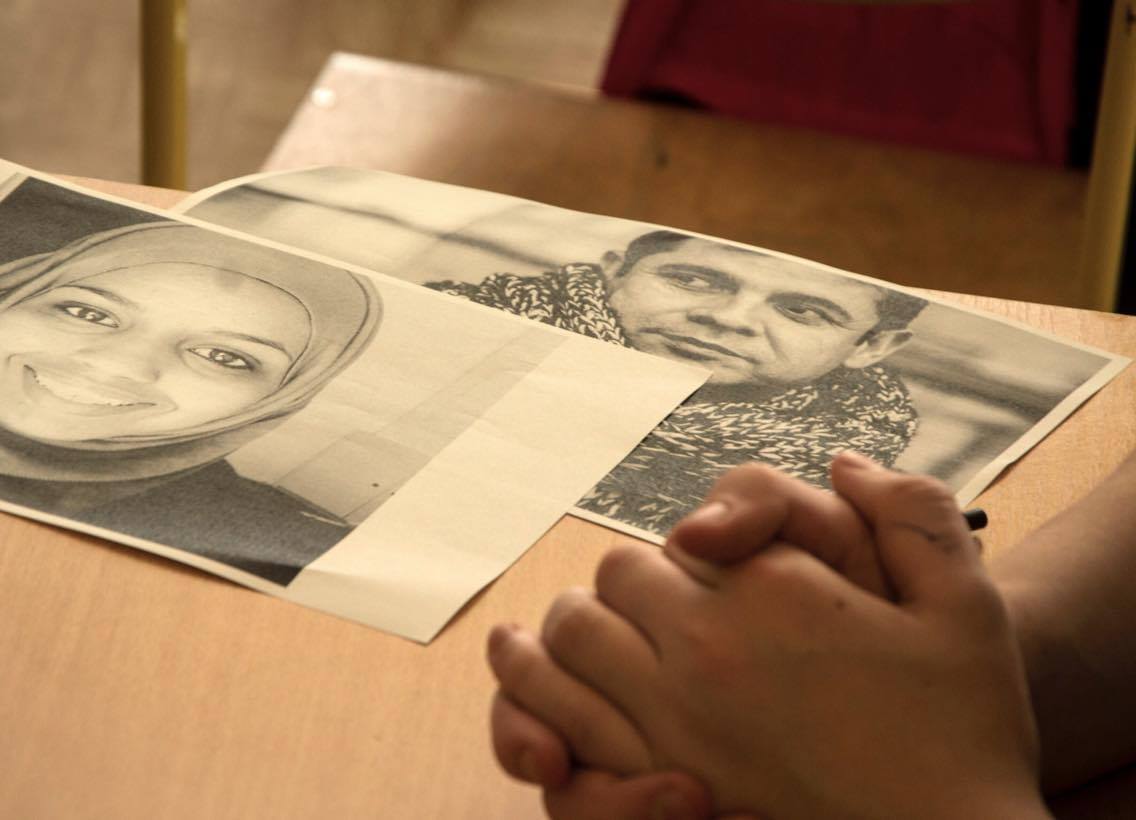 The sun barely penetrates the thick mist this early Thursday morning, but the spirits in a small blue minibus are light: Three activists, two musicians, a photographer and me are on a mission to the northernmost stretch of Slovakia, the Upper Orava region. „Azim dschan dobré ráno, Azim dschan dobré ráno“, musician Bashir sings from the backseat, slovakifying a Persian folk song while operating his drum. Azim is the driver and the initiator of this expedition. Next to being a busy TV show and documentary filmmaker, he is involved in a row of charitable activities. The Institute for Migration and Integration, which he founded, is organizing a series of events in schools and community centers all over Slovakia. These “intercultural dialogues”, as he calls them, combine music, poetry, and individual life stories from members of different cultures living in Slovakia. In this friendly setting, he hopes to involve students and the general public in an open conversation on migration and reduce the misinformation and reservations which so often dominate the debate.

The class teacher welcomes the team cheerfully and with big hopes. “I am really excited how the kids will react. This school is run by the church. Those children literally know no one who is not Catholic. Meeting someone from a different culture and even a different faith, that will be a lot to process…”

Strangers rarely find their way into the Orava mountains. Once a young man with African roots managed the school library for half a year. “He boosted literacy in our school during that time. Girls would exchange books twice a week just to be able to see him”, says the teacher with a laugh.
But lately she’s been worried about attitudes forming inside her class: Students have been talking a lot about the hoaxes and conspiracy theories which they come across at home or on social media. According to the picture mediated there, refugees are young violent men, coming to force their laws and religion on everyone. “Maybe meeting you, face to face, will start a thought process”. 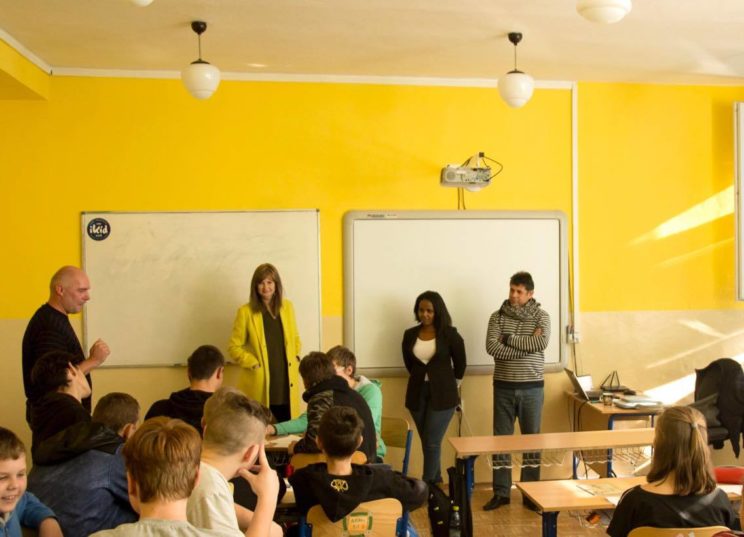 Lavia moderates the class. In the beginning, the children are asked to look at the pictures of two people, a man, and a woman, and write down their assumptions about the respective person. Only after that do Azim and Ny’mah enter the room, and a few children drop their jaws when they see the people they just described, alive and 3D before the board. Then each kid has to read out the associations they had with their photos: “employed”, “Indian”. “friendly”, “model”, “fashion designer”, “Turkish”, “believer”, “Muslim”, “Danish”, “married”, “working with kids”, “unsociable”. One kid wrote “terrorist”. They are in a silly mood, chuckling, and a bit embarrassed. Probably they understood that it is easier to make statements about other people when they are anonymous strangers than if they are standing right in front of you.

Ny’mah is the first to tell her story. Her family came to Slovakia from Somalia eight years ago. Her father came to Europe before that, because it was too expensive to resettle the whole family at once. Ny’mah has six brothers. But he managed to get them all into Slovakia and therefore into safety. Ny’mah narrates her struggle with the Slovak language. How she nearly failed her classes in the beginning and managed to graduate with the second-best grade (2) in Slovak. Now she is finishing her Bachelor’s degree and working as an interpreter. Someone applauds. One could hear a pin drop during her presentation; the kids are listening fascinatedly.

Azim was the last of his family to remain in Afghanistan. His parents and siblings managed to flee, He was just 16 when he was forced to join the military, in order to get a passport and be able to travel. Only this would never happen. Azim hesitated until it was almost too late to leave, hoping that the horrible war would come to an end soon. Only when the Taliban occupied Kabul and him and his friends were under direct threat did they finally run away. He remembered his former neighbor: a Slovak diplomat. Thanks to her he found a new home in Slovakia, studied journalism, made his own films and shows and bought a house in which he lives with his girlfriend, a Slovak lawyer. 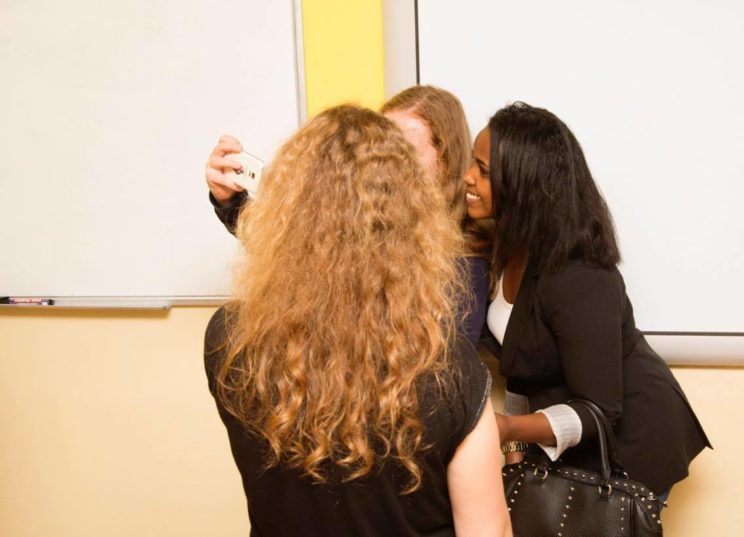 The school bell has rung over 20 minutes ago, but kids are remaining in the classroom, shooting dozens of selfies with the guests and flooding them with questions:
Did you kill somebody in the army?
Does your girlfriend have to convert to your religion when you marry?
Aren’t you supposed to wear a headscarf`?
Ny’mah patiently explains that some things are not obligatory and ultimately, it is up to each one individually how he or she chooses to express her faith.

Later, at lunch, the boys from the music band voice a very different opinion. Half joking, half serious, they criticize their Muslim sister for being a little too lax in religious things. On the other hand, Bashir drinks beer occasionally and Fajsal is smoking cigarettes, and both are married to Slovak women who they love and respect even though they don’t share their beliefs. They mock each other’s ambiguous interpretation of Islam persistently and with fervor. Why are conversations about religious practice so nebulous? Is it because the allegedly binding religious tenets still translate into such complexity and polymorphism in individual religiosity?

In the afternoon, we visit the nearby lake while waiting for the second event today, a panel discussion with live music. „Hey, Ny’mah, I learned a Somalian song recently!“ Bashir shouts and immediately starts howling an endless winding melody, mocking African tribal chants. Ny’mah rolls her eyes, then joins the general laughter. 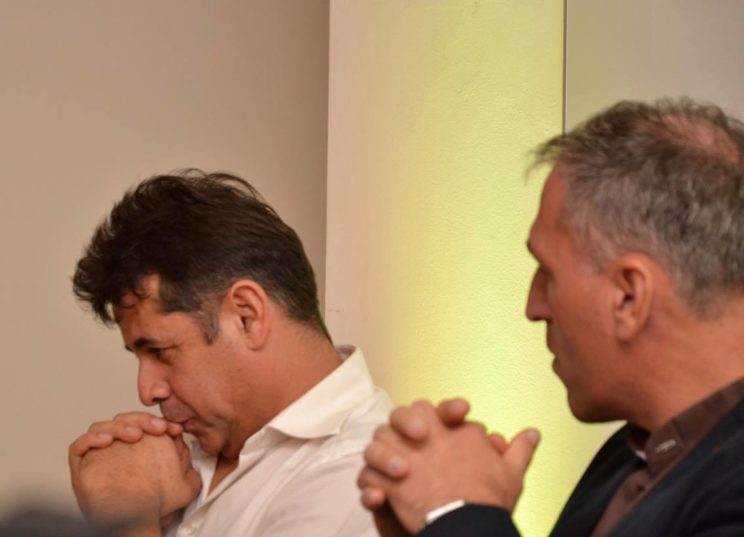 The evening event takes place in a Catholic youth center. Home-baked figure food is served in a cozy room with open fire and atmospheric lightning. The topic of the evening is “going against the stream”. First up is a man who turned from a police trooper into a priest. In colorful details, he tells the story of an intimate encounter with God which made him change his ways. Then comes Azim, telling about how people wouldn’t take him seriously because he learned Slovak in his first job from a fellow storehouse clerk who spoke with heavy Trnava accent. In the breaks between the guests, Bashir and Fajsal sing and drum their hearts out. Next up is a social worker who talks about his work with prisoners. Or rather, he doesn’t talk too much about prison but more how he prayed in this and that moment and how Christ filled him with his saving presence. He encourages everyone to live the letter of the gospel and openly confess to Jesus Christ at all times, even if it’s frowned upon. When asked what going against the stream means for them, Azim answers that he doesn’t think of himself as doing so. He is a refugee helping other refugees; what else should he do? For the other guests, expectedly, going against the stream means uncompromisingly going through with one’s believes. After the discussion, the prison worker asks Azim how he would like him to pray for him.

Back on the bus, the team is struggling to make sense of the curious event. “If they wanted a discussion about Christian lifestyle, fine, but then why did they invite you?” Ny’mah wonders. “These prison guard was totally nuts. This feverish missionary tone of fundamentalists just bugs me – no matter what religion. A normal person wouldn’t talk like that”, Livia says while shaking her head.

Azim just shrugs and looks in the back mirror. It is 10 pm and we have a three-hour ride through thick mist ahead. „Look, your court musicians are already asleep“, Azim remarks. Ny’mah sighs: „Thank God“.

activismethnographyrefugeesreligionSlovakia
Research on and with Facebook: Administrative aide or epistemological tool?
A traditional Slovak Christmas dinner or The rocky road from the stomach to the heart