We’re all in this together: Discussing extremism with extremists 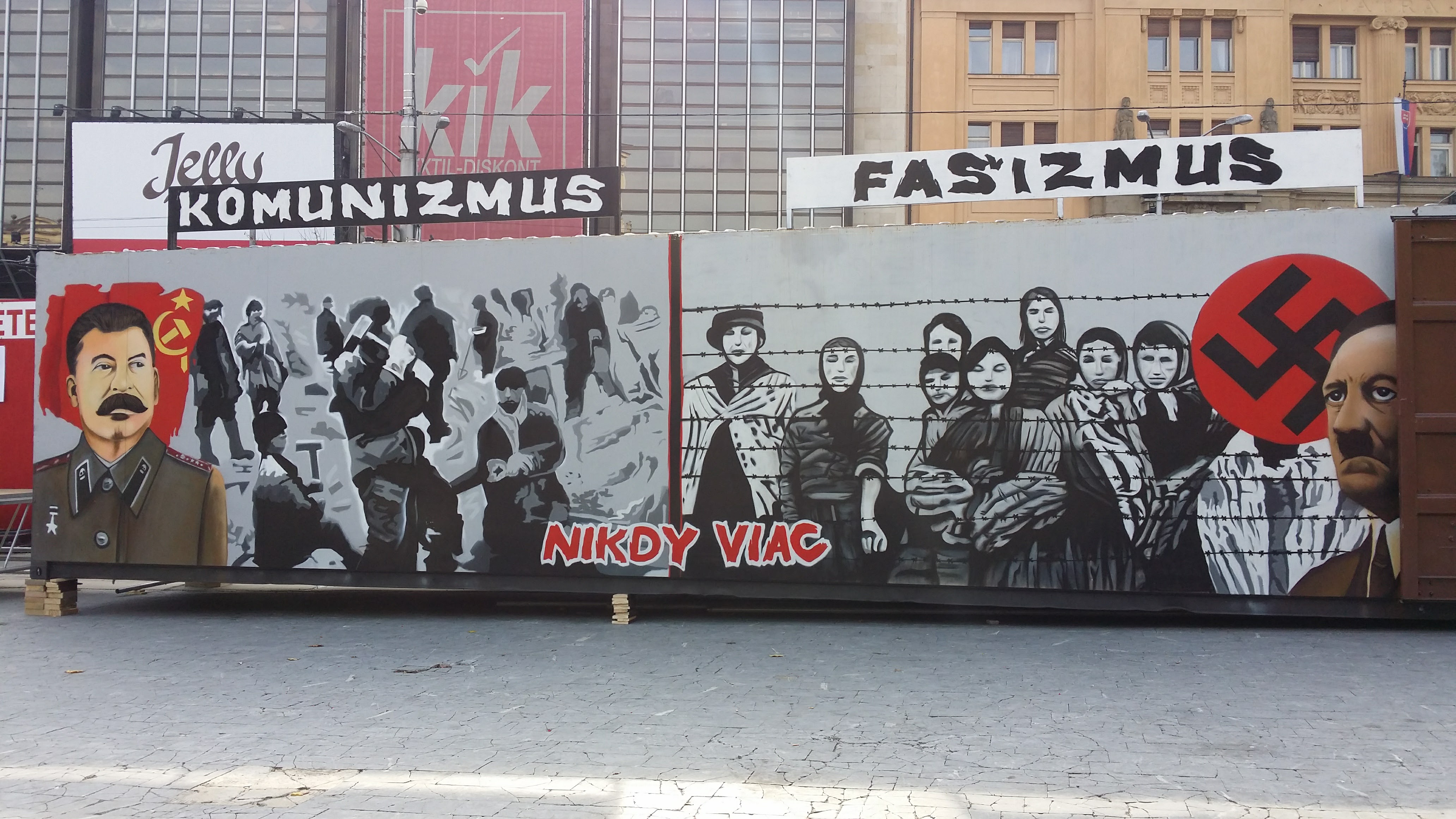 Knock knock. Hesitantly I open the door to my room in the hostel, the cheapest one in Žilina. It is 10 pm, freezing cold outside and the front door was locked – How did the person get into the building? In front of me: A lady, most likely of Roma origin, with a thick down jacket and barely any teeth in her upper jaw. She is telling me that she is running away from her husband who has tyrannized her for five years, and now she wants to book a room, but there is no one at the reception. She begs me to call the owner of the hostel since she has no phone. Confused and uncomfortable to be in the situation alone, I knock at the door with the only other two guests, apparently also Roma. One of them accompanies us outside with a cigarette, I call the owner, he doesn’t pick up, the lady immediately goes her ways with a bowed head. I thank the young man for joining me. He offers me a cigarette, tells me I have beautiful eyes and asks me to sit down and talk with him. I tell him that I am not in the mood for company. „Only 15 minutes! Please!“ he shouts after me while I retreat to my room. I lock the door and stay inside for the rest of the night, even though there is no bathroom. You can never be careful enough. Or? 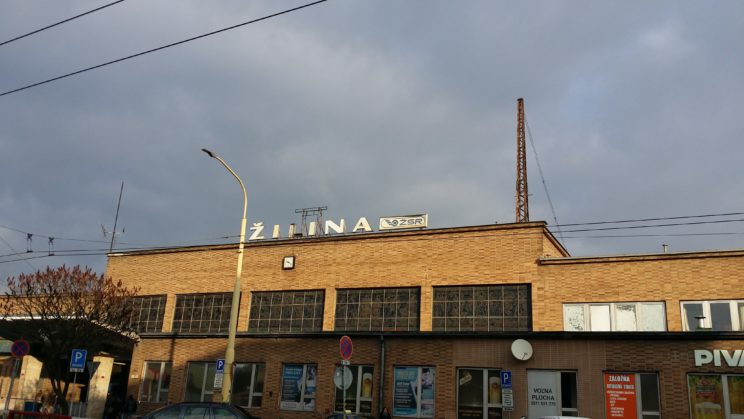 The next morning, I am sitting in the huge auditorium of Čadca’s cultural center (a useful heritage of Socialist times) and listen to a group of activists discussing extremism and Neo-Fascism with about 200 secondary school students. After showing a film about Holocaust survivors in Slovakia, they try to sensitize the young people for early warning signs of extremism, racism or xenophobia. The young people are calm and attentive, they are asking the questions that are itching them: „Why are there so many Roma? And why do they behave that way?“ One student also elaborates, „I agree with you, but on the other hand, when I see Roma living comfortably off welfare, and my grandma has only 400 € per month to get along, who should I explain that to her?“

Monika Vrzgulová, Ethnologist at the Slovak Academy of science and the Holocaust documentary center, patiently explains that many Roma are perfectly integrated, that those whose “behavior” the asker probably had in mind are only those living in ghetto-like settlements, and that poverty and stigma make it very difficult for them to ever escape that dire situation. Only one percent of the Slovak government’s budget is currently spent on Roma welfare, much less than is pocketed by corrupt politicians, and after all – would the listerers support spending more money in order to improve their conditions? The answer is a clear “No!” from the audience, supporting her point that this issue is indeed very hard to solve.

Patrik Dubovský, a scholar at the Slovak Pamäť Národa (Memory of the nation) foundation, adds: “I believe that Kotleba talks his mind when he is suggesting to „liquidate“ all Roma. This is what it starts like, this is what it started like for the Jews too, being verbally abused and likened to parasites and disease… There is no excuse for us nowadays because we already saw where this development leads. That’s the big advantage we have towards people at that time.”

The experts on stage are all members of „Zabudnuté Slovensko“, a civic association that emerged approximately like this: Shocked by the success of the openly Neofascist party Ľudová Strana Naše Slovensko in the 2016 parliamentary elections, architect Michal Karako wrote his favorite journalist Andrej Bán (whom he didn’t know personally) an e-mail which said: Let’s do something against this. For some reason, the message did not end up in the spam folder, and the two of them have been touring „forgotten“ (=zabudnuté) towns and villages across the country ever since, with a changing team of speakers dedicated to the cause. Today the constellation consists of Monika Vrzgulová, Patrik Dubovský, Milan Martin Šimečka, journalist of the liberal daily News denník N, and Professor Traubner, a doctor who likes to tell the story of how he examined the same Hlinka guard member who humiliated his family 30 years earlier because they were Jews. Andrej Bán is the chairman, Michal Karako stays in the background and makes sure the technology works and the police are informed that they are in town. Why? We will soon see. 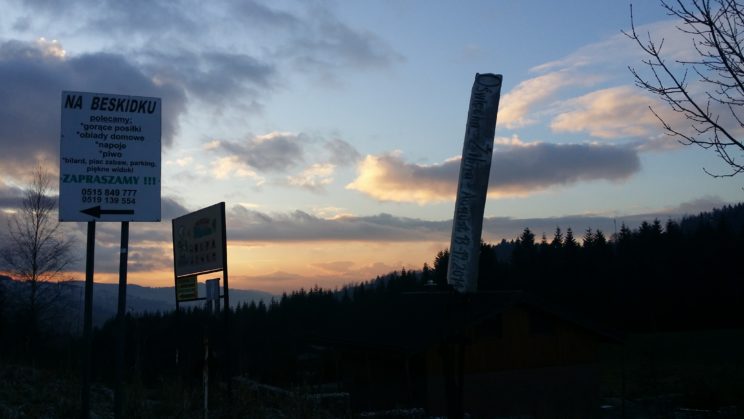 In the evening there is a bigger discussion for a wider audience, even with a guitarist playing live music to attract the undecided. Well, it’s not like there is a giant choice in Čadca on a Monday evening. Five minutes before the start the room is still gaping empty. Half jokingly, half disappointedly the crew is considering moving the discussion to a local pub. Then suddenly a group of 20 young men enters -most of them dressed in dark green T-shirts with the emblematic white double cross, the distinctive mark of Kotleba’s supporters. The podium stays calm – Their declared mission is to discuss with everyone, as long as there is no personal insult or threatening behavior involved. They start their question-and-answer routine, the green shirt block listens patiently. Until Bán opens the discussion for the public. This is when a bald-headed gentleman in green, obviously the leader of the pack, claims the microphone and doesn’t let go of it so soon.

„Dear Mr. Bán, thanks for coming to Čadca, but you can see that there are barely 20 people here today, less if you count „us“, your “loyal fans”, so you can see for yourself that people obviously have other problems than discussing the oh-so-big threat of extremism. In Žilina people are standing in the traffic jam two hours every day because of never-ending construction sites. People have to go abroad to work because they can’t find a job, leaving family and kids behind. That’s what bothers people. It’s not like I’m not sorry about the suffering of people in the past, but what are we supposed to do about it now? The past is the past! And I’m going to tell you one thing: The communist regime was not ideal, but at least I found a job directly after the school, I could sustain my family and had a comfortable life. Now people make few hundred Euros per month and live in bad conditions. And you know what else is unfair? It may be that 6 million Jews, died in World War II, but there were even much more soldiers and civil victims. Why do we ever only remember the Jews?“

The group obviously knows the gentleman, he has been to three of their discussions already. Šimečka reminds him that at least today, people have the freedom to travel and work abroad and that some are also fleeing from them, fascists. The green alliance responds with a scornful snort. Bán tries an understanding tone, confirms that all the things he mentioned are problems to be taken seriously. „We are all in this together. What is really to blame for many of these shortcomings is the rampant corruption within political elites, from which no party is exempted, certainly not Mister Kotleba, who employed half of his family in the town hall in his time as major in Banská Bystrica.”

Another guy from the green fraction speaks up. “You are talking a lot about freedom, but I think you see our system today through pink glasses. The media al follow a common stream and don’t allow diverging opinions. There is no media, only propaganda! It is forbidden to even start thinking about Holocaust differently. So where is the fascism here? Where people start doing research or where they are forbidden to research?

The podium is speechless for a moment – it sounds like he wanted to deny the Holocaust but didn’t go all in. Then they explain, admirably calmly, why denying the Holocaust is a crime and doesn’t have anything to do with “research”. The consensus in the green rows of the audience is that they are being stigmatized for not sharing mainstream views, that being called a fascist hurts their feelings and that they are unjustly accused of being extremists when nothing they do is against the law.

Bán: “And how do you manage to ignore the glorification of Nazi symbols, the Hlinka guard, and Tiso which belongs to the heritage of this party and is going on until this day? What about the party’s donation to a poor family – in the sum of 1488 €? Are you seriously going to tell us that this not a nod towards an extreme right-wing electorate?”

“I am a too insignificant to be privy to the reason why the party management chose this sum”, answers the green baldhead. “It might be just coincidence.”

Bán says “Sure, that’s why they did it twice!” Professor Traubner gets angry for the first time, “don’t insult our intelligence with this ridiculous excuse!”  The discussion is now on the verge of escalation. People shout, whisper, the tension is more than tangible. Bán tries desperately to get other people to engage in the discussion too, but they are too few and possibly too shy. Only one of the non-green visitors of the event, a middle-aged woman, comments: „I admire your courage to speak out loud about things you know nothing about.“ I suppose they have never been roasted with more class.

And it continues like that. The event ends after over two painstaking hours. But the discussion continues on the floor. The group hurdles around Bán and the others to address the rest of their topical repertoire: The EU’s witch-hunt on the nation states, the refugee conspiracy, the arrogant liberal media… It takes a lot of time and effort to break free, the green warriors simply won’t let the group go. But it’s already 11 pm and we have a long ride to Bratislava ahead. Finally, Michal falls on his seat behind the steering wheel.

“Oh dear, what a night. I’m sure these guys would invite us for a beer if we just continued discussing”, Dubovský remarks. “Well most certainly not”, Vrzgulová sighs. She looks exhausted and explains that the only thing that keeps her exposing herself to this taxing situation is the silent listener, the one who agrees but doesn’t dare to speak out. She hopes this kind of conversation may make him or her feel less alone.

I ask her: „But why are they so keen on discussing with you? They know they can’t turn you around, just like you will never convince them of your views. Where is the point?“

Vrzgulová shrugs: „It’s because at least, we talk to them.“ 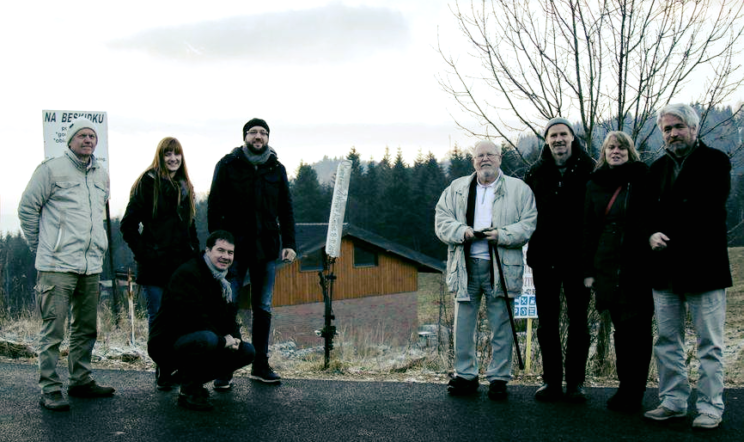 For those who speak Slovak, here is a Video of the whole discussion.

The last picture is by Patrik Kubizna.