Hosting the hegemon: My experience at the 18th IUAES World Congress in Brazil 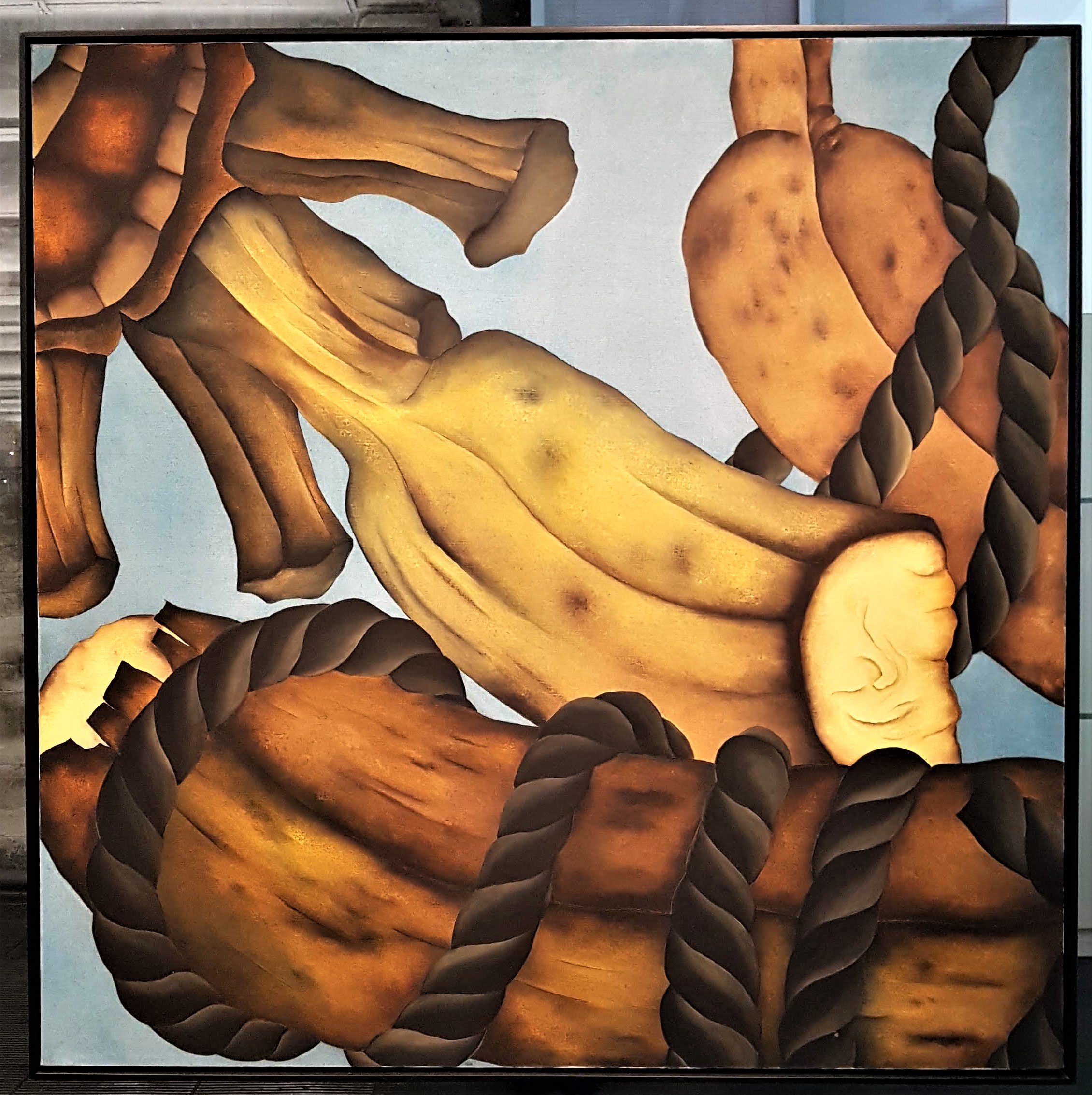 „What is the correct language, mom? The language everyone should speak?  It’s Portuguese, right? It can’t be English!”

This question seemed to be of utmost importance to my Brazilian friend when she was only 11 years old. She told me this episode to illustrate the quandary between pride and a postcolonial complex of inferiority which shapes Brazilians’ sense of self from childhood.

At the 18th IUAES world congress, the big meeting of the „International Union for Anthropological and Ethnological Sciences“ which takes place every 5 years and this time in Florianópolis, Brazil, this question seemed to be settled. When I arrived at my panel (announced in English) I was surprised to find that the panelists spoke Portuguese among themselves, that they had prepared their presentation in Portuguese and Spanish. The panel chairs were equally astonished that I am not in command of either of these languages. The professors even apologized to me (in perfect English!) but maintained that English is less “accessible” for the majority South American audience, and referred me to the English keywords on the slides. Some American and European guests reacted with frustration or even anger, leaving the room and roaming the venue for anglophone panels, largely without success, with over two-thirds of participants being of Brazilian origin.

The city of Florianópolis is located on an island in Southeastern Brazil and is also a popular holiday destination.

Anthropology, as we all know, has a quite ugly colonial past. The discipline roots back to a time when it was complicit with colonial power. It was aimed at rendering the colonial “other”, at that time degradingly referred to as savage, primitive, or tribal, intelligible and ultimately governable for Western intruders whose innate superiority remained unquestioned for a long time. But these times, or so I liked to believe, are long gone. Since then we have confessed, atoned and mended ways many times over. We even secretly accredit the discovery and dissemination of cultural relativism to early anthropologists such as Franz Boas, Melville J. Herskovits, and Ruth Benedict. Indeed, it seems that anthropologists are at the forefront of defending global solidarity, social justice and the rights of minorities of all sorts, and calling out racism, misanthropy, and neocolonialism worldwide. If there is one slogan all anthropologists rally behind, it is probably Ruth Benedict’s famous statement that “the purpose of anthropology is to make the world safe for human difference” (although she may have never said these exact words).

Although very much in support of my Brazilian colleagues‘ strive for self-assertation, I intuitively felt like I was the wrong addressee of their message. Anthropologists, before anyone else, should already be aware of the striking persistence of global inequality and the marginalization of voices from the global South, also in academia. Almost all anthropologists in the West speak several languages by default, English is a second language for many of them too, and so the allegation of monolingual arrogance seems beside the point. And how should we value each other’s ideas, findings, and stimuli if we don’t understand them?

Quite likely, what made me cranky was the fact that I was experiencing a postcolonial encounter which, in many ways, mirrored the experience academics from the postcolonial world must have in western academic contexts: Belonging to a marginalized and exoticized group, my options for interaction limited and my contribution acknowledged as welcome, but ultimately a bit outlandish. I must admit it is not the nicest of feelings. (To be fair, my new Brazilian friends made more than up for it by being extraordinarily eager to share their cultural wealth with all visitors – I visited a maritime reserve, took a guided tour of a Favela, attended a Samba party, watched an Afro-Brazilian Umbanda rite, and tasted an abundance of Brazilian food – all within the framework of the conference.)

To my shame, and despite being sensitized to the issue, I underestimated the importance of the colonial past and adjunct social and academic subjugation still has in the Brazilian context. Brazilian scholars draw their rage from an unconditioned solidarity with afro-descendent and indigenous people (indeed many anthropologists belong to these groups), whose systematic oppression and exploitation rendered the colonial project possible, and who remain marginalized until today. Intellectual decolonization was not just a footnote or a method, it was very much the core and the agenda of the whole congress, as is apparent from the selection of keynote speakers. And language and terminology are considered absolutely crucial in this endeavor. Mara Viveros Vigoya, professor of anthropology at the National University of Colombia with a PhD from a French elite university, and African heritage, held a keynote with the title „Between extraversion and “Our American” epistemologies: the place of anthropological production with a gender focus“. Her announcement to speak in Spanish as a political statement was greeted with frenetic applause. She also endorsed the dismissal of the term “Latin America” and backed the suggestion of using “Our America” instead: “By choosing a term that was not created in a hegemonic academic context, attention can be drawn to the re-appropriation of a project that was imposed on us”. 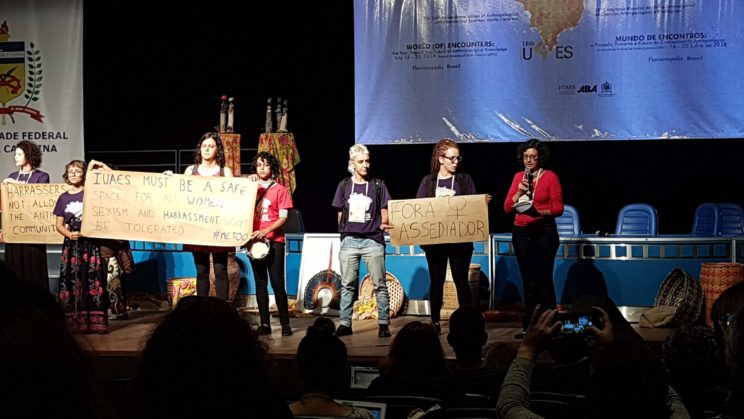 In Brazil, being an anthropologist is analogous with being an activist for social justice and anti-discrimination. Here students stage a spontaneous protest for women’s‘ rights

Kabenguele Munanga, born in the Democratic Republic of Kongo and presently a professor of Anthropology at the Federal University of Recôncavo da Bahia, titled his keynote “Brazilian Anthropology in the face of Western Hegemony” and referred to his own experience of being dually marginalized: Ethically African and subjected to racialized discrimination, Brazilian by nationality and therefore overlooked and belittled by Western academe. He claimed that anthropological epistemologies which were developed in a colonial context and display derogatory traits continue to be very influential. He named the concept of “tribe” as a particularly telling example: While using it in his early career, he grew more and more conscious of its inaccuracy; he felt it was an impermissible Western generalization of a plentitude of differentiated and complex modes of social organization. On the same day on a different panel, French anthropologist Gérald Gaillard (speaking in French, by the way, a requirement of his travel grant) argued the exact opposite, claiming it was impossible to abandon such concepts as “tribe” as long as his African participants used it and even considered it essential to understand various social dynamics, political conflicts etc. He observed with concern that anthropology was giving up on producing accumulative knowledge. Exchanging one terminology with a new one every few years bears the risk of losing valid and tested insights. Now it may well be that his informants incorporated the concept “tribe” because of theoretical colonialism, simply adopting an assumedly competent outsiders’ view as their own. On the other hand, doesn’t assuming that to be the case deny local actors the cognitive capacity of critically examining these foreign denotations and consequently applying them on their own terms? We know that language and concepts are not innocent because they may perpetuate inequality and commit acts of symbolic violence upon the signified. We are, however, well advised to differentiate and judge by the case.

Anthropology has not yet abandoned the idea that the outsider’s view comes with certain epistemological benefits (otherwise it would be anthropology at home exclusively furthermore). A certain distance helps discern rules and patterns that are too axiomatic for insiders to even be aware of them. Nowadays, we are in the lucky position to overcome dated and inaccurate assumptions and denominations in dialogue and have outsider and insider views complement each other for much deeper and more nuanced analyses. And yet, we still need to get much better at taking the voices from formerly colonized parts of the world seriously and distribute academic credit on a global scale more justly. My experience of the IUAES made this point very transparent to me. However, a few questions remain: While asking for differentiation and sensitivity for local languages, epistemologies, and lives, why is a concept as fuzzy and generalizing as the „West“ declared as the political enemy and indiscriminately identified with colonialisms past and present? And why is it Portuguese, of all languages, that is charged with so much political symbolism as the language of empowerment and emancipation, while is also the language of the European colonizer who, according to Achille Mbembe, pretty much invented slavery and stayed in power in Brazil uncontestedly until the end of colonialism? For the next event of this sort, I kindly ask for a little bit more of translation 🙂