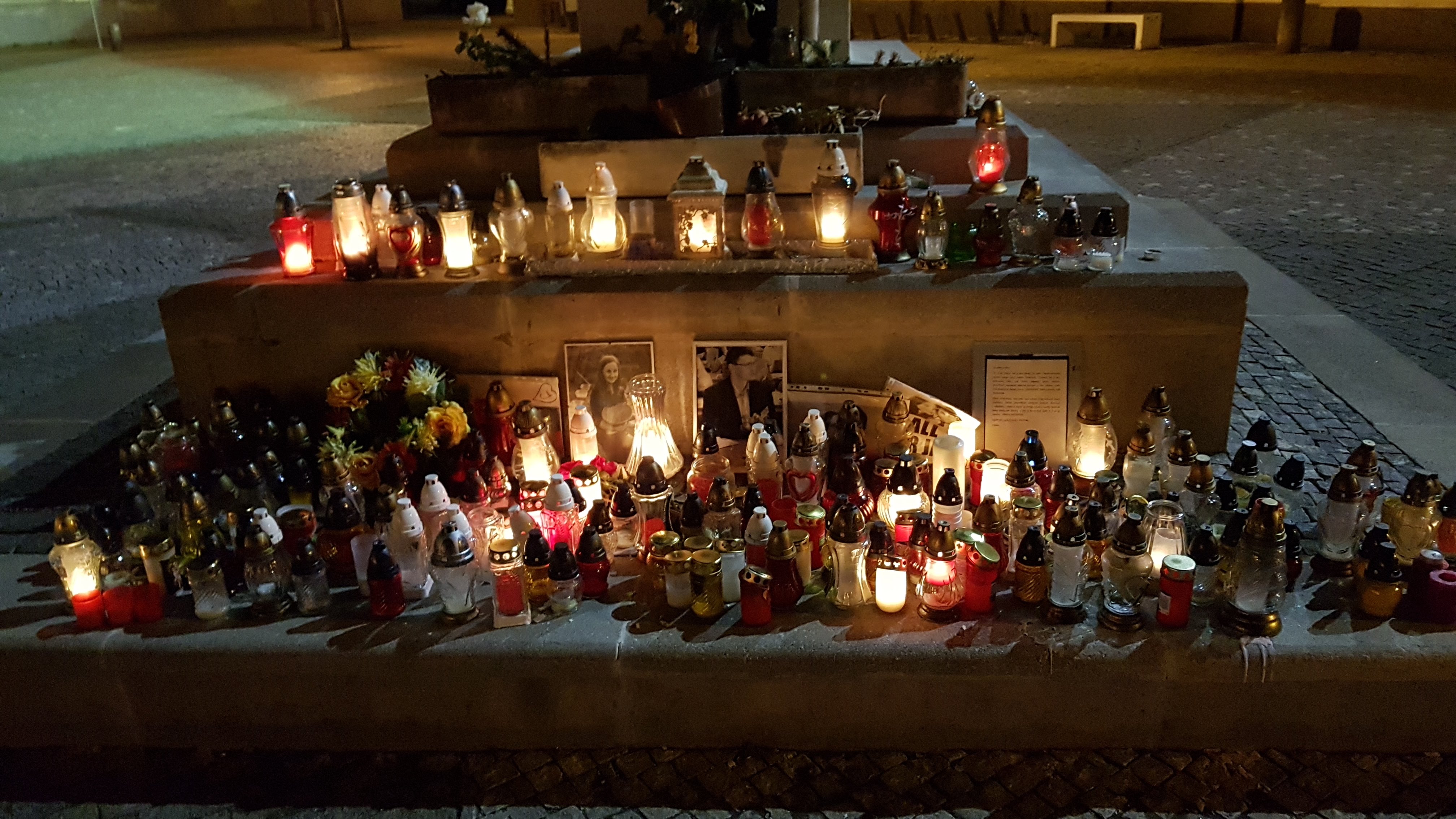 The candles are still burning in schools, dorms and public places, around the portraits of Jan Kuciak and Martina Kušnírová, the young couple whose murder shook the Slovak public one month ago and catapulted it onto news desks of media around the world in an intensity yet unknown to the small country. What happened next will be the material for future history books: Few days after the deed, the people named in Kuciak’s last article were sent home from their government posts, little later the Minister of Interior resigned. Upon the pressure of president Kiska for more far-reaching political readjustments, Robert Fico finally resigned as well and installed his vice prime minister Peter Pellegrini as a substitute. On Wednesday the 21st, the second cabinet proposal of the new governor has been approved by Kiska. This means the ruling coalition stays in charge and Fico’s party smer maintains its political stronghold, and the personnel of the new cabinet doesn’t exactly trump the previous one in terms of credibility. At the same time, the country saw the biggest protest marches since the Velvet Revolution in 1989. Tens of thousands gathered in Bratislava each Friday, several thousand in other Slovak cities and even abroad. 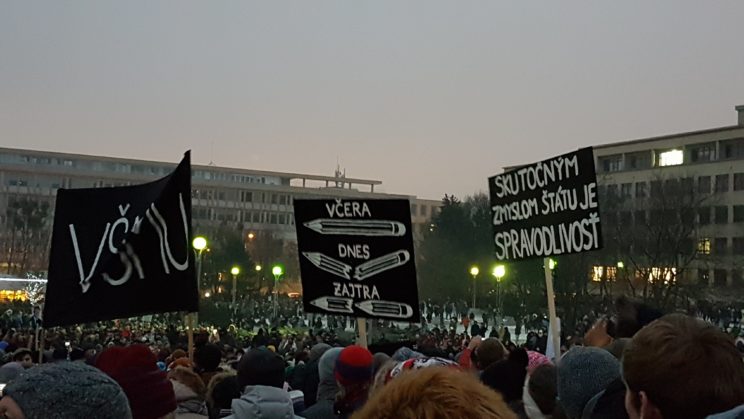 So far for the info international media like the Guardian, the New York Times or the German Welt provided. Anyway, „being there“, I still feel like some aspects of the story are often overlooked or distorted. The news reports I read often state that Slovaks were shocked and speechless about the revelations in Kuciak’s last piece, which showed the connections of members of the Italian `Ndrangheta mafia group to the highest levels of Slovak politics. Truth is, barely anyone was surprised. Corruption and clientelism have long been treated like a given, like the weather. “Keby sa nekradlo”, if there was no stealing, is the perpetual mantra to explain what prevents Slovakia like to reach its full potential. In the World Corruption Index, which measures nothing but how corrupt citizens think their country is, Slovakia usually ends up at the bottom of the table, far behind Poland, Georgia, and the Baltic states. By that, I don’t mean to say that people were indifferent. Indeed, there were two major anti-corruption marches last year which drove tens of thousands on the street, attacking amongst others the notoriously corrupt Interior Minister Kalinak who finally stepped back in the aftermath of the murder. These protests were celebrated as a sign of civic emancipation and might well have been the dawn of a new level of political awareness which a young generation socialized in democratic Europe desires and demands. However, they never took the speed needed to bring about any significant change.

Secondly, one might get the impression from the foreign news that Jan Kuciak did some kind of undercover work, consciously putting his life on the line. Indeed he didn’t even do any spectacular mule-like reporting, which makes his killing seem even more absurd and out of place. All he did was do his job, search archives that are open to the public upon request and dig into court cases which were partly reported on before. Sure, the sheer amount and depth of evidence he provided in his final piece didn’t fail to leave an impression. Which gets me to the next assumption commonly accepted to be true, that Kuciak and his fiancée were murdered by some nameless Italian mafia killers who disappeared like shadows never to be seen again. This is anything but certain yet. Why would the Italian mafia stop him from spreading data that was largely known, thereby drawing even greater attention to the matter? It just doesn’t add up. The quick and thorough investigation of the crime is one of the protestor’s major demands, including the removal of the police commissioner Ivan Gašparovič who lost the trust of the public to lead this important task through his allegience to smer and countless investigative mistakes. 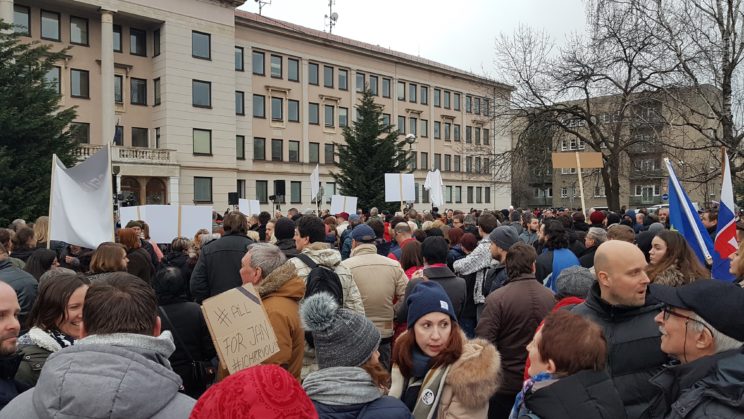 You can see that Slovaks have all sorts of reasons to be upset. The way they chose to articulate their anger and disappointment was the most surprising aspect of the whole affair. The marches, or manifestations, proceeded amazingly quiet, there were designated areas for parents with little kids. There was barely any chanting and screaming, instead, people brought candles, smart-phone torches, and jingling key rings (a heritage from the 89-demonstrations) to show presence and unity. Clearly, they were belying the prime minister’s absurd speculations about the protests being staged by Georg Soros in order to orchestrate a violent political overthrow. Most speakers talked about Jan and Martina, often from their personal relationships with them. The speeches cast them as role models in terms of courage, commitment, and clear-sightedness, however refusing to turn them into heroes or their death into some kind or martyrdom. Politicians were not welcome at the events, with the exception of president Kiska who announced and held a minute of silence at the first manifestation. Generally, there were very few political and ideological demands. I would have expected angry reckonings of particular politician’s wrongdoings, holding them responsible for the murder and all the shady business that it unraveled, but none of that happened. The only swear words that were uttered were quotations from the powerful – for example pinning the attribute “antislovak prostitutes”, which Fico liked throwing at journalists, to his own head.

The only desire that was expressed on the podium over and over was to be able to trust in politics again. That means no less or more than holding political delegates to certain standards of transparency and decency – the same standards they apply to themselves. The first protest was launched by a young couple on Facebook, with the plain reason that they did not want their yet unborn child to grow up in a country that seems stuck in the 90s, Slovakia’s darkest age in terms of clientelism and kleptocracy. They soon teamed up with the organizers of the previous anti-corruption marches (two high school students) and more like-minded people, and found a fitting name for the emerging movement: „Slušné Slovensko“. „Slušný“ is literally translated as decent, but it also contains notions of polite, honest, and hard-working. My impression is that people are admirably united on this matter. From my right-leaning landlady to left-liberal Bratislava coffeehouse, all can rally behind this name. 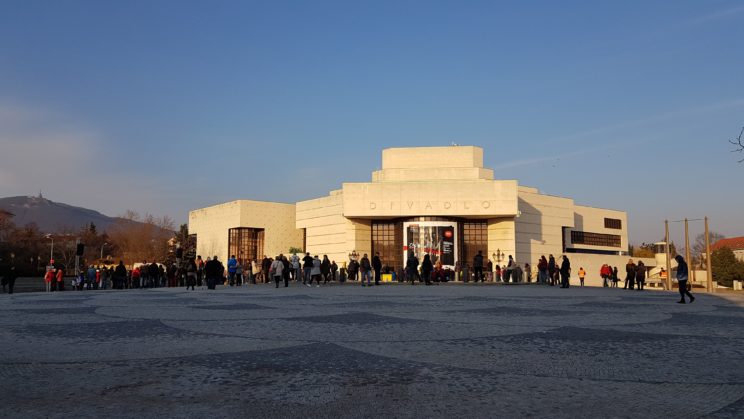 The truly remarkable thing though is that this movement is not making the typical divide „pure people vs. corrupt politicians“, but is framing slušnost as an ongoing project, a technology of the self which they, first and foremostly, apply on themselves.

„If we want true change, for a more responsible, honest and trusting society, we need to start with ourselves“, such was the purport of all speeches combined. At last Friday’s manifestation in Nitra, a student of Kuciak who had visited his class in investigative journalism went as far as to say that „we are all to blame for his death“ – for being too indifferent, apathetic, uncritical, and giving politicians the idea that they can get away with everything. „We traded freedom and active citizenship for a little bit of economic comfort.“ The crowd was cheering at his words. In a widely shared post on Facebook, a user used a vignette of another protester taking the bus home from the demonstration, complaining about too high ticket fairs and consequently dodging the ride. „He understood nothing“, she subsumed, and went on to explain: „Let us be decent! Every day, in big and small business! I am afraid that in any other case, we do not deserve better.“ Is there a moment of self-mortification, of self-realization which will eventually overcome the political resignation which paralyzed Slovakia for so long? A column of a big daily newspaper summarized it like this: „Grumbling and indifference are highly addictive, but healing is possible. By diving daily into gratitude and awareness“.

It seems like a whole nation is undergoing a process of ethical readjustment. So far, no one is happy with the actual outcome of the upheaval – the new government is no more trustworthy than the old. The biggest march in Bratislava was canceled by the organizers last week, for fear of fuelling a divide of the movement rather than uniting it. Have the protests been too tame? To unspecific? Have people got distracted from their original goal through the side quest of finding new shared values? Have they, again, relied too much on the active few? One of the organizers of the protests said that they may not have achieved everything, but he feels like “Slovakia is already a better place than four weeks ago. We have been made aware of our power.“ We will see how far, and where specifically, this inner change will carry.

activismmoralityopinionSlovakia
About dreams and nightmares
„I feel at home“