Fico, refugees, quotas and the EU: A press review

So the European Court of Justice rejected the legal action of Slovakia and Hungary against the refugee redistribution quotas. According to this European Union policy, Slovakia is required to take in 902 refugees from overburdened Italy and Greece. How did the press react to this (rather expectable) outcome of a 2-year process?

PLUS Jeden Den, a picture book tabloid newspaper, conjures great danger in their choice of photo (see above) and headline: „WILL WE BE FLOODED WITH MIGRANTS“, so the dramatic title, followed by „The end of all hopes!“. The drama is moderated a little bit by the fact that this report only made it to the bottom of page 4, and by a „security expert“ who recommends not to get panicky just yet since most migrants move to another country while their asylum process in ongoing anyway.

Pravda, a center-left daily newspaper, opens yesterday’s edition with the failure of the quota trial and dedicates an extra two pages to it. They put a lot of effort into explaining the quota system as such and Fico’s opinion on it: The reason why he rejected the policy is that he thinks quotas „don’t work“, and that no migrant would want to stay in Slovakia anyway. The results of the redistribution process so far seem to support his claim: Only 17% of the planned transfers have been realized yet. And after all, Fico offered „flexible solidarity“ in the shape of money, technology and personal. Pravda also made it very clear that the little rebellion there doesn’t change anything about Slovakia’s status as a model student of European integration. After all, Fico accepted the court’s ruling with mild disagreement, very differently from enfant terrible Orban who stated that this decision is a threat to European security and will be fought in any possible way by his administration. Only, all legal means are exhausted now, and should the country further refuse to accept the migrants, they will probably face financial sanctions (just like the Czech Republic and Poland). Slovakia cleverly eliminated this threat by accepting an impressive amount of 16 refugees in 2016. 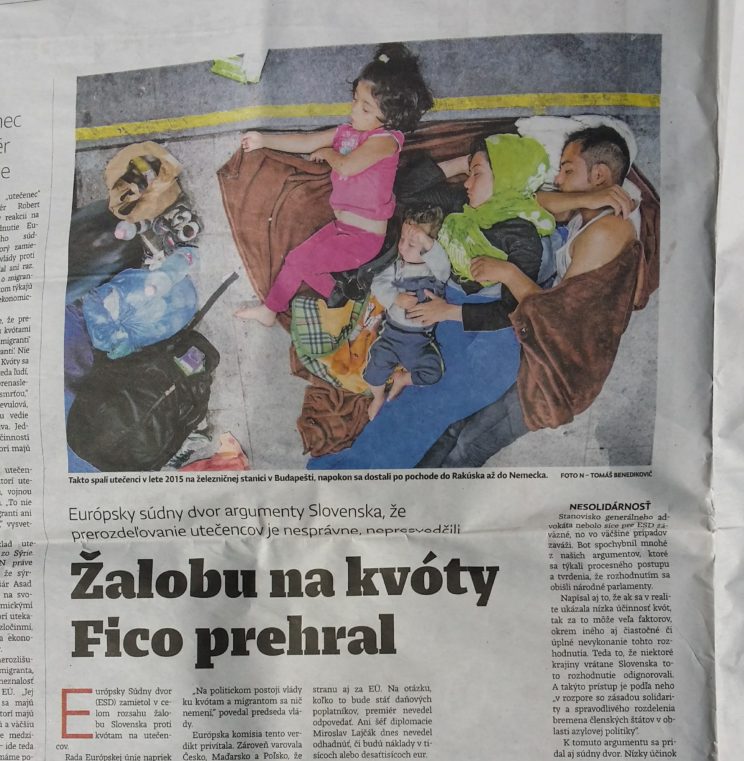 The center-right, liberal Denník N, who is best known for its widely read web news service, chose a remarkably different tone, as is apparent already from their lead picture. They frame the failure of the bid as Fico’s personal defeat („Fico lost the petition against the quotas“) and reminds his readers of the fact that the whole procedure was a show for the parliamentary elections in spring 2016 when Fico wanted to pose as the protector of Slovakia from illegal migrants. In a column, we read the opinion of a lawyer with an expertise in asylum law. She notices that Fico (as well as the other news mediums) failed to use the correct term „refugees“ in this entire debate. Referring to the persons in question as migrants or even „economic migrants“ is a factual mistake since the quota regulation would only affect individuals with very good prospects of being granted asylum. She expands that the limited success of the redistribution program which critics like to stress can be blamed on member states like Slovakia and their missing willingness to cooperate.

These newspaper should be a mirror image of the range of public opinion on the refugee topic, with the first publication probably appealing to the most people. It is interesting how only if read together, they offer the whole image of Slovakia’s involvement with the EU in this case. Fico is performing an almost impossible balancing act: He is presenting himself to his electorate as self-confident and combative by suing the EU, while almost simultaneously claiming to belong to the core of Europe (jadro Európy), knowing well that a majority of the population is pro-EU. In order to sustain this impression, he thus far managed to pay the smallest possible price (16 refugees). It will be interesting to see what will happen to and through the 902.